And the disciples came, and said unto him, Why speakest thou unto them in parables? He answered and said unto them, Because it is given unto you to know the mysteries of the kingdom of heaven, but to them it is not given. For whosoever hath, to him shall be given, and he shall have more abundance: but whosoever hath not, from him shall be taken away even that he hath.” (Matthew 13:10-12 KJV)

Keys of the Kingdom of God

Everything you receive from God hinges on you knowing Him, knowing His Truth, and walking it out in obedience. Christ said, if you have knowledge of the mysteries of the Kingdom you will receive more in abundance. This is because they are keys that unlock blessings and victory in your life as you advance God’s Kingdom.

Paul writes of the mystery revealed to him,

Whereof I am made a minister, according to the dispensation of God which is given to me for you, to fulfil the word of God; Even the mystery which hath been hid from ages and from generations, but now is made manifest to his saints: To whom God would make known what is the riches of the glory of this mystery among the Gentiles; which is Christ in you, the hope of glory.” (Colossians 1:25-27 KJV)

In Colossians the Apostle Paul explains that God hid them, but now at the appointed time He revealed them to us through the Gospel of the Kingdom. Did you know that God didn’t hide them from you, but He hid them for you. Yes, He protected them for you so the prince of this world could not abort them. At the right time God revealed them. Now it’s up to you to believe, obey and declare them over your life and ministry, and see victory in every area of your walk with God.

Declaring The Mysteries of The Kingdom

Listen to this message as it will stir you to boldly declare the mysteries of the Kingdom of God. Remember to share it everywhere you can.

Brian Burke carries a reforming voice and is a revivalist in the Body of Christ. His passion is to win the lost and to reach the nations with the Gospel of the Kingdom of God, and see every believer doing the work of the ministry. The anointing on his life is bold and awakening. Through his unique calling, believers are ignited, empowered and mobilized to fulfill their callings.

He is separated by God to equip His church through the mandate the Lord ordained him with, saying to him: “I want my church to arise in the power of My Spirit.” Brian has dedicated his life to the fulfillment of Christ’s desire for His Ecclesia (Matthew 16:18) in every nation and every city.

This site uses Akismet to reduce spam. Learn how your comment data is processed.

Send Me a Friend Request

Are you tired of religion? Want to make a difference for Jesus? Get on the AriseMyPeople Insiders list by subscribing today, it's free. Sign Up...

"And now I will send the Holy Spirit, just as my Father promised. But stay here in the city until the Holy Spirit comes and fills you with power from heaven." — Luke 24:49

Go! The Harvest Is Ripe… 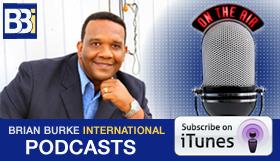 Hey, my name is Brian Burke and I'm the author of BrianSBurke.com. My passion is to win the lost for Christ and God's divine call on my life is to help you fulfill the purpose of God for your life and become a world changer. Read more...
Manage Cookie Consent
We use cookies to optimize our website and our service.
Manage options Manage services Manage vendors Read more about these purposes
View preferences
{title} {title} {title}